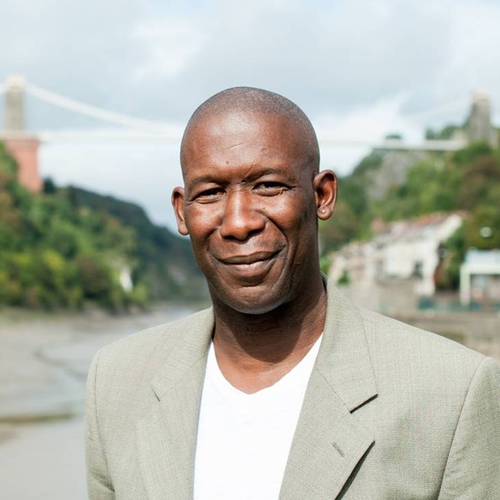 We often see Square member Roger Griffith busy working, having meetings or kicking back with a coffee in our Square Lounge – so we decided to have a word with him about what he’s been up to. As co-owner and much loved ‘G-man’ on Ujima Radio, to successful entrepreneur and author of ‘My American Oddessy: From the Windrush to the Whitehouse’; as well as collaborating with various Bristol institutions and organisations such as: M-Shed, Situations and BBC Radio 4 – he’s been very busy! Read our interview with him below to find out more:

How did Ujima Radio start out?

Ujima Radio is built upon the pioneers of pirate and community radio stations that were not getting their music played on mainstream radio and began their own radio stations. Ujima gained an OFCOM licence in 2008 and in 2010 when our owners went bankrupt we rebuilt it as a social enterprise.

How long have you been involved in the venture?

I have been there as a broadcaster at the beginning as The G-Man undercover from my day job! The founding Director Kevin Philemon asked me to help behind the scenes and I became Chair in 2009. When we became a social enterprise I became co-owner and Director of Strategy and Partnerships. I still have two shows ‘The Old Skool Cruising Show’ on Monday’s 4-6pm and ‘Bristol’s Big Conversation’. The arty feel of the Square Club, service and friendliness helps in my work and the other Ujima Director Paul Hassan is a fellow member.

What are the main aims?

Ujima Radio CIC is an ambitious, wide-reaching social enterprise and broadcaster. It creates new ways to share information, improve employment and training opportunities and provides a platform for cultural and creative expression. Its broadcasting philosophy is to use news, arts and culture to bring together the diverse Black and Minority Ethnic communities and wider communities in Bristol and the region. Overall we celebrate cultural diversity and challenge inequality through social action by using media, projects and events.

Since launching in 2008, the station has attracted over 350 volunteers, whilst it currently caters for over 100 volunteers in various capacities. Our listenership is growing and has now reached 30,000 listeners every day.

What part of Bristol are you based in?

Due to landlord problems we had to move from the heart of our community in St Pauls, Bristol in 2015 but we have great premises in central Bristol at Creative Youth Network.

What does being names the UKs No.1 Community Radio Station mean to you and your team?

The awards mean great recognition for the team, volunteers and our community who support us. We were nearly out of business 18 months ago. To go from that to being voted UK’s No 1 Community radio station is amazing achievement.

What community projects do you have coming up?

We pride ourselves on being more than just a radio station and being a community connector between the community and other businesses. We are working with University of Bristol and Bristol Green Capital Partnership on getting more Black and Minority Ethnic people engaged in sustainability issues in the city and we have a long partnership with UWE Bristol across a range of issues particularly giving their media students a chance to work and thrive.

What other organisations have you collaborated with?

Black History Month is always busy and we have extended our events seasons throughout Autumn in collaborations with Circomedia, M-Shed, Make Sunday Special, and BBC Radio Four. We have just completed a special showcase of female talent in music and spoken word in partnership with St George’s Bristol called Sisters With Voices.

I have recorded a number of interviews at The Square over the years and recently I was commissioned by Situations, Bristol to make a podcast about trees for Katie Patterson’s Hollow project in the gardens of University of Bristol. To reflect the diversity of our great city I asked people who had moved to Bristol to give me a memory of their favourite tree from their homeland. Such was the talent and international flavour at the Square that I got voices and memories from staff and visitors from Poland, New Zealand, France, Bangladesh and even an amusing tale about the Canadian Maple tree that still makes me blush! That’s what I like about the Square, a place where I can work, have fun and be inspired with great food and wine at my fingertips!

CLICK HERE to find out how you can become a member of The Square.